One of the most important facts about the ocean to keep in mind, is that we actually don’t know very much about it. The National Ocean Service estimates that “more than 80 percent of the ocean is unmapped, unobserved, and unexplored.” What we do know about the remaining 20 percent is that the ocean is vital to life on and off land. Virtually all of humanity depends on healthy ocean life. Transport, medicine, sustenance, art and culture would be different without the influence of the ocean.

Much of the ocean remains a mystery, which evokes feelings of awe and panic, depending on who you ask. That’s because awareness of how human activity impacts the earth’s natural resources is growing. Currently, 150 million metric tons of plastic pollution are circulating natural marine habitats. The rise of the conscious consumer is not limited to one age group, but trends with younger generations—A 2019 study showed that 45 percent of consumers ages 18-34 prioritized environmentally conscious purchases, while 14 percent of people over 55 agreed.

The impact of careless consumerism is becoming more obvious by the day, but there’s still plenty of reason to be hopeful. If we take collective action towards things like plastic in the ocean, future generations of ocean discoveries will continue to prove how essential a healthy ocean is to our personal lives.

In the meantime, one of the best things we can do is stay curious about the things we have yet to learn about the ocean. There is no better way to trigger that human instinct to care, love, and nurture than a bunch of incredibly cute photos of zany-looking marine life.

5 of the Ocean’s Unbelievably Cute Creatures

Scientists estimate that 91 percent of ocean species have yet to be classified. Ready to top that mind-blowing realization? Take a look at our list of the 5 weirdest, cutest ocean creatures:

1. Sea bunnies: Jorunna parva is less than an inch long, and lives in the Indo-Pacific Ocean. Common colors of the sea bunny include shades of yellow, orange, and white. Here’s what we know about sea bunnies: They are covered with sensory organs that are useful for finding food and mates. The little bushy, tail-like part on its backside are its gills. If you ever see one in the ocean, you should not touch, much less try to eat it, as it thrives on a diet of toxic matter. Some of those toxins are studied by scientists, who have used them for treatment against cancer in humans. Its conservation status is not endangered, but Jorunna parva is a great example of the kind of ocean life humans do not fully understand yet.

2. Dumbo Octopus: The name “Dumbo Octopus” refers to a larger group of deep-sea cephalopods that live about 13,000 feet below sea level, on the ocean floor. While this group of octopuses are named for fins that look like a mix between elephant-ear-propellers, this is only a small part of what helps them swim. Dumbo octopuses move through the ocean using an umbrella-like web of tentacles. The “ear” fins are like little propellers that are lovable all the same. Scientists are still conducting research to figure out some of the main roles the dumbo octopus plays at the bottom of the ocean.

3. Sea otters: Sea otters are a top ocean predator, but there is no denying their striking similarity to the family dog. Sea otters are crucial for maintaining balance in ocean habitats, by eating sea urchins that would otherwise prevent the growth of much-needed kelp forests. While sea otters are one example of marine life that can tread water and land, it is totally possible for a sea otter to thrive without ever setting foot on the ground. They face a history of impact from human activities, from hunting, to commercial fishing, and oil spills.

4. Halloween Crab: Gecarcinus quadratus have a much cuter, much less tongue-twisting of a common name: Halloween moon crab. This is probably due to its orange and purple claws, and orange spots that make it the closest thing to a living, breathing jack-o-lantern that we’ve ever seen. Although the Halloween Crab was first formally described in 1853, scientists only began to uncover the life history of Gecarcinus quadratus in late 2010. This required a close look at how the halloween moon crab lives, reproduces, and migrates throughout life. Most crab species are uniquely adapted to live on and off land, where they have a role in facilitating a clean ocean by picking up and eating debris. Crabs can look for food in earthy, sandy habitats, or on the ocean floor.

5. Leafy Seadragon: The leafy seadragon is endemic to the ocean near south and east Australia, where it camouflages in seaweed and kelp environments. Leafy seadragons are related to seahorses, and no, they can’t breathe fire. Slightly larger than a teacup, the leafy seadragon is listed by the International Union for the Conservation of Nature as “near threatened.” One of the biggest impacts of populations of leafy seadragons is plastic in the ocean.

Take this list of cute ocean creatures, and use it to reflect on what’s yet to come for marine biology in the very near future. Of course, there are countless more species of marine life—The sheer cuteness of the examples listed above are just the cherry on top of reasons we should care about the ocean.

Although we become who we are based on what we know, and that solidifies throughout life, we really never stop learning. It is important for people of all ages to be open to new ways of understanding the planet, our impact, and our future. Joining the wave of eco-conscious is the best way towards fixing the planet’s problems, rather than simply making them less disastrous. We don’t just need to recycle more, we need a clean ocean for these marine species to thrive.

Getting People Thinking About the Ocean

The ultimate goal for us at Socktopus, Ink is to raise awareness of the importance of marine life through making eco friendly clothing. We created a sustainable clothing company that encourages thoughtful consumerism. Our first product is a line of fun socks, designed with the health, happiness, and future of kids in mind. The socks are made of 100% recycled plastic fibers. The colorful characters of the Socktopus crew—Bubbles, Shelldon, Bobtopus, and others—are loveable representations of the real marine life that we are trying to protect. We can reduce the negative impact of climate change, if we want to. All we need to do is keep the wonderfully weird ocean in mind when thinking of how to make the world a better place. 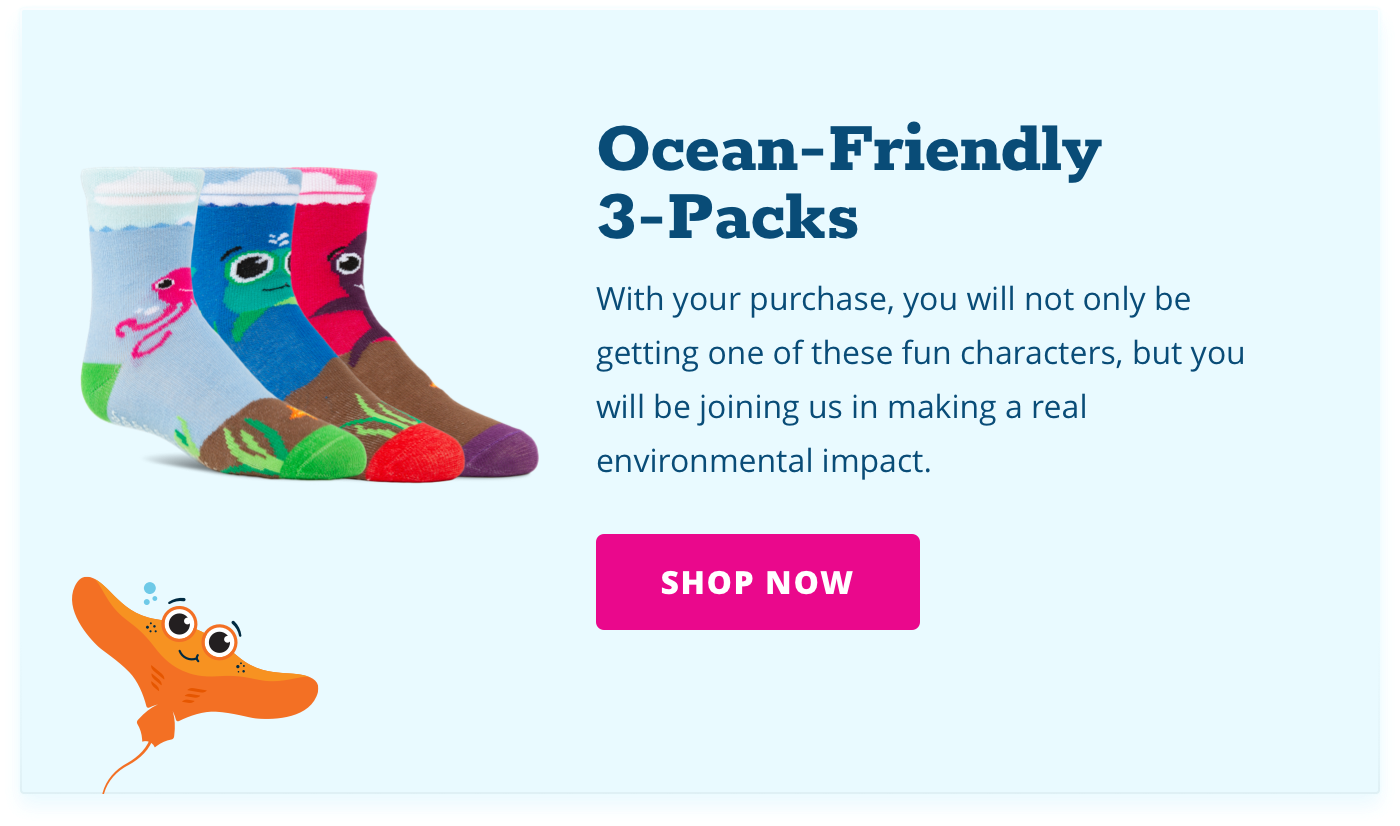 5 Things You Can Compost

Become a member of our Socktopus Loyalty Club!

Do you have the Socktopus NFT? If so, just connect your wallet